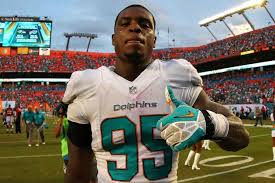 Results: Winner Ell, none of the rookies really had a good season, but the most hope appears to be in Jordan who was considered a raw prospect coming out. He had 26 tackles and two sacks, but he was not a starter and battled injuries. He still has not earned a starting spot going into next season, but even as a situational pass rusher I think he can continue to grow as he has the size, speed, and athleticism. CB Jamar Taylor was a non-factor with 3 tackles while playing in 9 games. However, the team expects him to be fully healed next season and ready to take on a bigger role. K Caleb Sturgis had a good season solidifying the kicking job after beating out Dan Carpenter for the job. Sturgis went 26/34 on the season including 23/27 from inside the 50yd mark with a career long of 54yds. S Don Jones made a solid impact as a good special teams gunner with the ability to jar the ball loose and lay down hard hits.

Results: Both winners, Floyd played in all 16 games starting in only 1 as a nice rotational DT with a great pass rush push up the middle, but only average run stopping ability. Floyd has good footwork and moves well for a man his size allowing him to disrupt plays up the middle. He had 19 tackles, 2.5 sacks, and a FF on the season leaving coaches to wonder what he can do with a year of production under his belt and increased playing time. Another good choice for impact rookie would be WR/KR Cordarrelle Patterson. Although he was very inconsistent as a WR, Patterson was the best kick returner in the league and a game changing threat who can make plays in space. Patterson had 469yds receiving with 4 TDs as the deep threat, 158yds rushing with 3TDs, and 1,393yds as a returner with 2 TDs and 33.5ypr including a 109yd TD to open a game. He led the league with 10 returns for over 40yds passing all the competition by a long shot. He should be an even bigger factor on this offense with better QB play and more consistency to his game.

Results: Both losers, Collins was more of a project this season than a finished piece as he had 43tackles on the season and was used in many different ways as he played snaps at DE, LB, and S in college. However, Collins had really improved by the postseason as he had 9 tackles, a sack, and an INT as a good playmaker on the defense. He seems due for a big 2nd season in the league with his experience and learning over the course of the season. Boyce played in 9 games with 9 kick returns for 214yds with a career long of 41yds while adding 9 catches for 121yds. He should only get better and he could have an expanding role in the return game and passing game; as the Pats value versatility.

The real impact rookies are CB Logan Ryan, S Duron Harman, and WR Aaron Dobson. Ryan had 35 tackles, 1.5 sacks, 5INTs, and a FF on the season while playing in all 16 games while starting 7 games as he made plays all over the field which his stats show. Harman played in 15 games with 31 tackles and 2INTs while playing in 15 games and starting 3 games; expect him to take on a bigger role next season. WR Aaron Dobson played in 12 games while starting 9 of them with 37 catches for 519yds with 4TDs and a career long of 81yds. He was very inconsistent (dropping passes), but he can only get better from this experience and he provided Brady with the big downfield target he needed at times. However, consistency will be the key to his success next year, as well as, staying healthy.

Results:  Both winners, Vaccaro started 15 games this season before getting hurt and really made his mark on the field. He had the job of covering slot wide receivers and tight ends while playing in the box and, of course, covering the back end. This shows what is expected of safeties in the league today and Vaccaro was up to the task. He had 79 tackles, an INT, a FF, and a sack on the year. Another good impact rookie would have been WR Kenny Stills who proved to be a good down field option while Lance Moore was out with injury. Stills had 648yds and 5 TDs on the season while starting 10 games and playing in 16.

Results: Both winners, when the Giants drafted Pugh they didn’t know if he would be a better fit for guard or for tackle, but injuries forced him into the RT spot where he improved as the season continued. Pugh started all 16 games at RT where he excelled in run blocking, but struggled against the pass. There is still talk of a move inside to guard as some believe it might help him be even better, but the versatility to play both makes him that more important to a team with aging lineman. Unless an upgrade is found, expect Pugh to play RT next season continuing to improve as a main stay on this offense even a move to guard would still make him a key lineman.

Results: Winner Ell, Moore was able to show his versatility from all linebacker spots, but he proved to also have some pass rush skills in addition to being a sideline to sideline tackler. Moore added 50 tackles, 4.5 sacks, and a forced fumble on the season most from the OLB position where he should be a starter for years to come. QB Tyler Wilson loss his job to undrafted rookie QB Matt McGloin causing Wilson to get cut twice by the Raiders. He was on the Raiders practice squad, but was signed by the Titans late in the year.

Results: Both winners, Johnson struggled early in the season, but since then he has play very well as a good fit for Coach Chip Kelly’s offense with his athleticism for his size. After starting all 16 games at RT, he should be much improved next season and eventually should take over for Peters at LT as he gets older. TE Zach Ertz has proven to be a good pass catcher as the #2 TE and DT Bennie Logan has taken over the NT job in Kelly 3-4 defense; both would have been good picks as impact rookies as well. 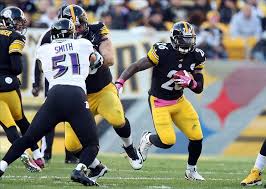 Results: Winner Ell, RB Le’Veon Bell added a running dimension to the team when it was in need of someone to take over the job. Although he was inconsistent at times, he should be able to benefit from a full offseason now that he is healthy and the obvious starter. Bell had 860yds in 13 games with 8 TDs and he added 399yds receiving on the year. LB Jarvis Jones didn’t really provide the immediate impact they were looking for, but he did have 40 tackles on the season and a sack. However, he should continue to improve and become a bigger part of this defense as the Steelers continue to add much needed youth.

Results: Winner Mike, while both players played well, Allen has really turned into a star with 1046yds and 8 TDs. Allen has given Rivers the target he lacked since they loss WR Vincent Jackson via free agency. Allen is a good route runner with the ability to create separation and go up and get it. Fluker has struggled in pass protection at times, but is a dominant run blocker; he has played both right and left tackle due to injuries. However, Fluker will be a solid right tackle for years to come and may eventually be able to transition to the left side.

Results: Both losers, Williams had knee injuries which led to an IR designation, but they did have plans of involving him in the rotation at tackle. He has great size, a high motor, toughness, and strength. WR Chris Harper was waived by the team despite being a 4th round pick and he is now on his 3rd team recording only 1 special teams tackle on the season with the Packers. He is a strong receiver, but he is built like a small TE so it will be interesting to see if they could use him in the right places. There was no real impact rookie for the Seahawks, but TE Luke Wilson had 272yds and a TD as the 2nd TE in limited play and DT Jordan Hill had 7 tackles and 1.5 sacks in 4 games of limited play. However, both players should see more time going forward and should improve from the experience alone.

Results: Both winners, Austin struggled as a receiver early in the season, but came along late as the explosive player the Rams drafted. However, it didn’t long for him to make his mark on special teams as he was both a good kick and punt returner. Austin can make plays in space whether as a RB or WR and the absence of Bradford made him even more important to the spacing on the field. Look for his role to grow in the offense as the talent around him continues to improve. Austin had 418yds receiving with 4 TDs, 151yds rushing on only 9 carries with a TD, and a punt return for a 98yd TD. OLB Alec Ogletree was another good selection with 117 tackles, 6 FFs, 1.5 sacks, and an INT. Ogletree often got abused in pass coverage, but that is an area where most rookie linebackers struggle. He should continue to improve overall and has really made his mark on this defense.

Results: Both winners, CB Johnathan Banks held his own as many teams preferred to try him over veteran CB Darrelle Revis, but Banks has good size and coverage skills which made him a good matchup especially for bigger receivers. Since they chose not to move Revis around, Banks at times even had to cover #1 WRs, but with the Bucs #11 against #1 WRs and #5 against #2 receivers the secondary did a good job against the passing attack with limited pass rush up front. Banks had 55 tackles, 3 INTs and 5 pass deflections on the season playing better as the year went on. With the league leaning towards bigger CBs thanks to the Seahawks, new HC Lovie Smith should be able to use him in a role similar to veteran CB Charles Tillman. QB Mike Glennon had a good rookie year with 2,608yds passing with 19TDs and only 9INTs. However, Glennon must continue to improve overall and he needs to complete more of his pass attempts; but, overall not a bad job for a rookie. His growth going forward will be the key as he will probably not be guaranteed the starting job.

Results: Both winners, Warmack proved to be the tough run defender everyone expected him to be, but he did struggle at times in pass coverage. Known as a hard worker and technician, Warmack moves well for his size and is expected to be a key building block of the team. They hope that new HC Ken Whisenhunt can continue to help Warmack’s progress and use him to help restart the success of the running game.

Results: This one results in a tie with both players being factors on different sides of the ball. CB David Amerson proved to be the CB that the Redskins have lacked since Champ Bailey as he has good speed, size, and coverage skills. However, he is still a rookie and had a lot of inconsistencies in his game, but they seem to have found a keeper. Amerson had 48 tackles, 2 INTs, a forced fumble, 10 pass deflections, and a TD. TE Jordan Reed proved to be a good athletic tight end with the ability to stretch the field as he was the 2nd leading receiver with 499yds and 3 TDs.