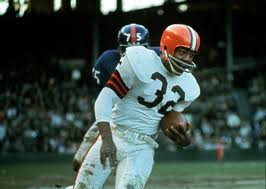 Jim Brown is the originator. He was the best combo of size/speed/athleticism that the league had ever seen at that time. Brown is the Real Deal / Total Package.

Barry Sanders was a real automatic touchdown machine. Sanders had the best speed and vision combination in NFL history. He could take the ball back 10 yards and turn it into a long run or touchdown; almost video game like. He did most his work without good playmakers so everyone knew who was going to get the ball and he got it done anyway.

3. Emmitt Smith “Definition of a RB”

Emmitt Smith has the stats and rings to prove why he is the definition of a running back. Smith didn’t come with fancy speed, but ran with heart, toughness, and power. He was always there in the clutch and was one of the key factors in the Cowboys championships in the 90’s along with Aikman and Irvin.

Walter Payton had a smooth stride that made it look like he outran defenders with ease. He could do it all from run, catch, block, throw, and punt making him an all-around solid player. He led the Bears to greatness and was the ideal running back and player of his era.

Earl Campbell was a huge cannonball on the field. Campbell made a living running all over players with a toughness that made them not want to do it again. Defenders usually ended up with parts of his jersey in their hands instead of stopping him.

First, let’s start with Jim Brown’s YPC (yards per carry) stat. He averaged just over 5 yards per carry; that is a first down every second touch. That’s amazing, and he had at least 1,000 yards every season he played. That’s another outstanding stat because they only played 12-14 games when he played. Brown is truly the definition of a great running back. He also averaged over one TD a game and is the only running back to win MVP 3 times.

All I have to say about Barry Sanders is YouTube. Type his name in and watch as he turned (-5) yards into first downs and even touchdowns. Things he did to avoid tacklers were simply unseen and unheard of. He would’ve smashed at the time Walter Payton’s all time rushing record had he not retired early.

Many know that Walter Payton was the all time leading rusher in the NFL. However, many don’t know how good he was at everything else, from blocking to catching the ball out of the backfield. He would also punish tacklers that tried to bring him down. Sometimes throwing punches to oncoming defenders. Payton could do it all and did it all.

4. Emmitt Smith – The Best Vision Ever

Many discredit Smith a little because of the great O-lines and talent around him on those great Cowboys teams. Yes, he had talent around him, but the vision he possessed also made them look great. He was a patient runner that always picked the right hole and when he hit the hole he hit it hard. He wasn’t the most powerful or most elusive, but he had a little of everything that made him great. So much to the point that he retired as the league’s all time leading rusher.

The numbers this guy put up were simply amazing. Let’s start with his 2,000 yard season in which he only played 14 games. The speed that Simpson had allowed him to explode for long runs. One of the most explosive backs ever, O.J. is the only running back to have six 200 yard rushing games. 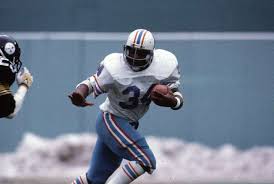