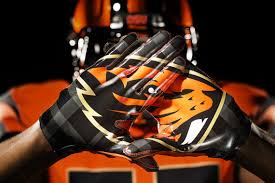 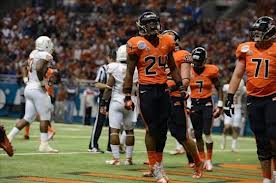 Last season the Beavers surprised a lot of people last year with their success. The were ranked as high as #7 last year. This year they return 8 starters on offense and are definitely in the position to improve offensively with the experience they have coming back. The Beavers lose their top WR in Markus Wheaton (91 rec 1244 yds 11 tds), Those are big numbers they will have replace, but Brandon Cooks is poised to have a big year after pulling in over 1,000 yards last year and averaging 17 yds a catch. He is their deep threat and he will be their #1 option. The running game was up n down last year as they Beavers had a few freshman vying for the position, but Storm Woods emerged as the starter and had a pretty good season. Despite having a injured ankle for most of the year he still rushed for 940 yards and 13 touchdowns. If he stays healthy he will become a household name this year. The Beavers shuffled QBs last year, shuffling through three QBs: Sean Mannion, Cody Vaz, and Richie Harrington. I believe Vaz will be the starter this season because he posted a 11-3 td to interception ratio. His consistency will be key this season to how far the Beaver go in the Pac-12. 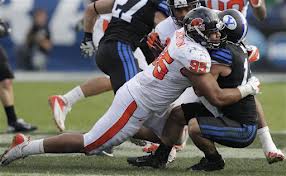 The Beavers return their leading sack machine in Crichton and their leading tackler in Doctor. Last year the Beavers were ranked 22nd in scoring defense only giving up around 20 ppg. They have an excellent pass rushing D that places a lot of pressure on the QB and makes the secondary job a lot easier. This allowed defensive backs like Reynolds to break up multiple passes and also jump some passes. While the pass D was strong, the Oregon State rush defense has a little ways to go. In order for this team to truly be considered for the Pac 12 title they will have to become better at stopping the run. They are very weak up the middle of their defense and will have to address it.

The Beavers are poised to have another great season, and I believe they possibly could win 10 or 11 games especially with a great head coach in Mike Riley. However, with three tough road games in San Diego State, Arizona State, and Oregon, its going to be tough to beat those teams on the road. I believe they win the one at Arizona State, but a plus is they get USC at home. USC hasn’t fared well in Corvallis, Oregon the last few times they have been there. That should be an interesting game. Beaver fans have a reason to be excited this year though.